The Ethereum Merge dominated crypto news in late summer 2022. Stories about the event even began appearing in mainstream business and technology publications, and finally, on September 15th, after eight years of development and testing, the Ethereum blockchain seamlessly switched its consensus mechanism (how it confirms that transactions are valid) from proof of work (PoW) to proof of stake (PoS).

This feat has been described as something akin to building and swapping out a new type of engine while the plane is in flight — except with billions of dollars in financial assets on the line as well. The Ethereum developers pulled off the upgrade without downtime or technical hiccups affecting the blockchain or the applications that run on it. Beyond this serious technical triumph, here are three other reasons why the Ethereum Merge is a big deal.

1) More Eco-Friendly Operations
Prior to the Merge, the Ethereum blockchain consumed approximately as much electricity as the entire country of Finland. After switching to PoS, it now consumes 99.95% less electricity and creates a tiny fraction of its original carbon footprint.

With Ethereum’s original proof-of-work consensus mechanism, miners raced to be the first to solve a cryptographic puzzle and validate the next block in the chain — earning that block’s rewards of newly minted tokens. The PoW model leads to a computing arms race where miners run racks of power-hungry mining computers and servers at full speed to try to beat out their competition. It takes an immense amount of electrical power to keep the machines running and therefore the environmental damage can be hugely significant.Under proof of stake, validators don’t need to run powerful mining rigs to validate blocks and earn rewards. Instead, an algorithm randomly selects the validator to confirm the next block. To set up a node, a validator must first deposit 32 ETH as collateral against dishonest or negligent behavior. If a validator attempts something malicious, such as adding fraudulent transactions to a block, some or all of their 32 ETH will be “slashed” from their stake. Similarly, validators whose nodes are frequently offline may see their staked ETH leaking away as they incur penalties for being unavailable. The risk of losing their stake is what helps ensure validators remain honest and diligent. A wonderful side-effect is that securing the Ethereum blockchain is also now vastly more environmentally responsible. 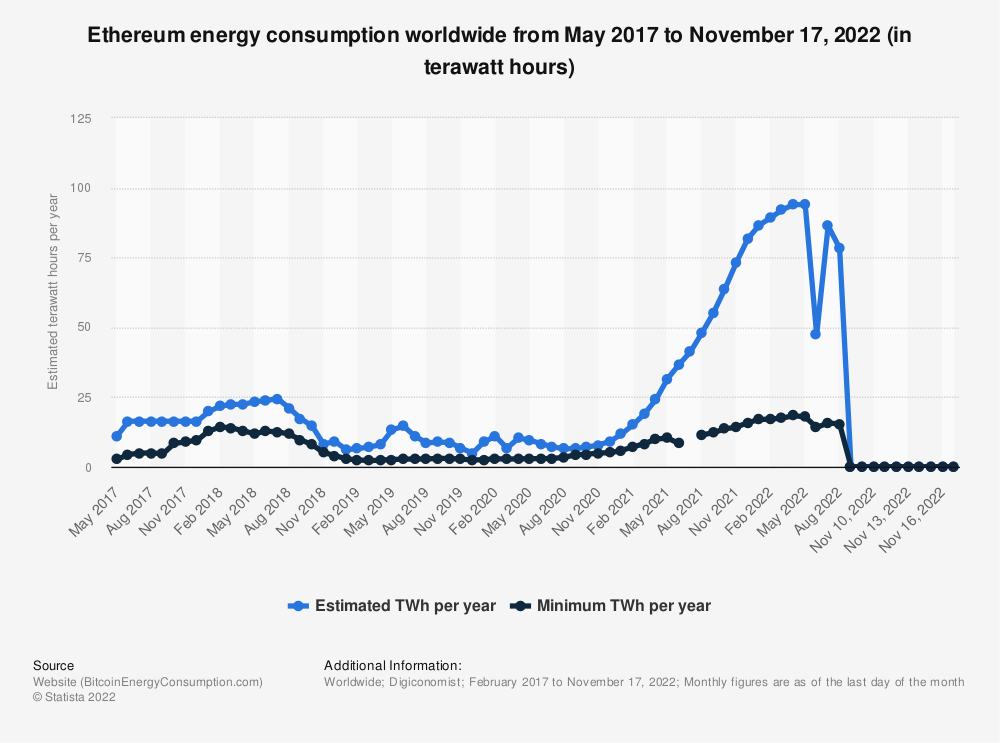 PoS Ethereum also enables more people to participate in earning rewards for validating transactions than with PoW. Now, anyone with 32 ETH to stake, a powerful yet consumer-grade computer, and some technical know-how can become a solo staker and earn ETH by running a validator node.

There are also staking-as-a-service providers that will stake your ETH and run the hardware for you. Since 32 ETH is a significant investment, some providers let stakers pool smaller amounts of ETH with others to reach the 32 ETH required. Since the staked amount is shared, the rewards are shared, too, according to the amount of each investment. While staking with a third-party provider requires less technical knowledge than solo staking, it requires a great deal more trust. Due diligence research is crucial when selecting a provider.

Another important note is that Ethereum staking deposits can’t be withdrawn until after the forthcoming Shanghai upgrade — expected to happen in mid-to-late 2023. Until then, staked ETH remains locked in a smart contract and can’t be withdrawn, transferred, sold, or used in DeFi. To overcome these limitations and add flexibility, staking service providers developed liquid staking tokens. Lido, for example, issues stETH tokens 1:1 in exchange for ETH tokens deposited into their protocol. These tokens earn staking rewards in the form of additional stETH, and holders are free to sell these tokens on decentralized exchanges at any time. In fact, the simplest way to participate in ETH staking is to purchase liquid staking tokens on an exchange. Besides stETH, Rocket Pool’s rETH, and cbETH from Coinbase are popular liquid staking tokens that passively accrue staking rewards over time.

3) Reduced Token Issuance
Prior to the Merge, approximately 4,930,000 new ETH tokens were minted every year, inflating the supply of ETH by more than 4 percent annually. That means as millions of new ETH tokens arrived on the market every year, the value of any existing ETH tokens in your wallet was continuously being diluted.

Under proof of stake, Ethereum will only issue around 584,000 new tokens per year. This would increase the supply by around 0.5 percent. However, when combined with the effects of Ethereum Improvement Proposal (EIP) 1559, AKA “the burn”, the ETH supply can become deflationary.

Without getting too technical, EIP 1559 (which went live in August 2021) burns some of the ETH users' pay for transaction fees on the Ethereum blockchain. The way the math works out post-Merge, whenever “gas” fees on Ethereum are 16 Gwei or higher, more existing ETH is burned than new ETH is issued. A decreasing total supply means ETH tokens held by investors become worth proportionately more over time. Ultra Sound Money has several real-time data graphics and simulations that illustrate these deflationary effects.

More to Come
The Merge delivered an array of amazing improvements to the Ethereum ecosystem almost literally overnight, including more environmentally responsible operations, more options for investors, and blockchain mechanics that help make ETH more valuable over time. Beyond this, the Merge demonstrates that the ecosystem can successfully ship upgrades and sets the stage for a range of planned advances to the blockchain’s performance, costs, and capabilities. This all bodes quite well for the future of Ethereum.